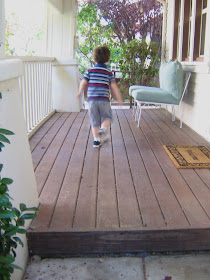 I have spent much of the last four months preparing for last Wednesday: Bob’s first day of pre-school.

First there was the desperate potty training: Fun for the whole family.

Then because of Bob’s intense-ish separation anxiety, we enrolled him in a six-week summer school program at another school where I could stay in the class and work up to leaving him for longer and longer periods of time. He only cried until he threw up the first four times that I left him. From then on it was just the wailing without the projectile string cheese.

In the last two weeks, we bought a book for Bob called Llama Llama Misses Mama about a llama with issues. Somehow Bob only seemed to grasp the-whiny-little-llama-was-miserable-and-sad part, never the-he-made-friends-and-had-fun-and-mama-came-back part.

At the suggestion of another mom at school, Bob and I created a book together about his new school and routine. He seemed to enjoy working on our project but got fixated on the “Bob brushes his teeth” and “Bob puts on sunscreen” parts of his schedule. He focused only on wanting to re-write these parts of the story to include, "Bob watches another Toot and Puddle, the one with the tire swing" and "Bob eats ice cream sandwiches for breakfast."

When we arrived at school Wednesday morning, Bob was excited. He donned a red choo choo name tag and got to work on a sponge paint project and said goodbye to me. No tears. As I locked the yard gate behind me, I saw Bob running out of the classroom. He smiled at me and waved but ran in the opposite direction towards the bin of train toys. I heard a teacher call out from inside the room, “We’ve got a runner!” I trusted them to deal with it, made my way to the car and drove the eight blocks home. No tears.

Later when Bob came home, he told me that school was ok and that he liked the bike yard and the grapes parts the best. Then he sat on the couch and ate a green felt tipped pen.